Effective March 17, 2020, NCMB is operating but its Raleigh offices are closed to visitors.

NCMB has closed its offices to visitors.

To protect against the spread of COVID-19, NCMB has closed its offices at 1203 Front Street in Raleigh to all visitors. NCMB will continue to accept deliveries in the vestibule at the front entrance and through the mail slots.

NOTE: Most NCMB staff are telecommuting. This has disrupted normal business processes, and delays are expected. Please be patient with us during these unprecedented times.

Nov 15, 2013  Newsletter:  Forum, Fall 2013  Categories:  Bulletin Board Comments:   0 comments  Print Friendly Version  |   Share this item
Physician assistants are the NCMB’s fastest growing licensee group. Since 2009, their ranks have increased by 2,000 to just over 5,000 PAs – an increase of approximately 40 percent over five years. Over the same time period, the much larger physician licensee population has increased by nearly 3,000 (an increase of about 10 percent.) And there are no signs that the PA growth rate is slowing. PAs are frequently mentioned as critical to addressing the state’s developing shortage of primary care doctors. However, data show that PAs, like physicians, tend to settle mostly in the state’s population centers.
PA population infographic 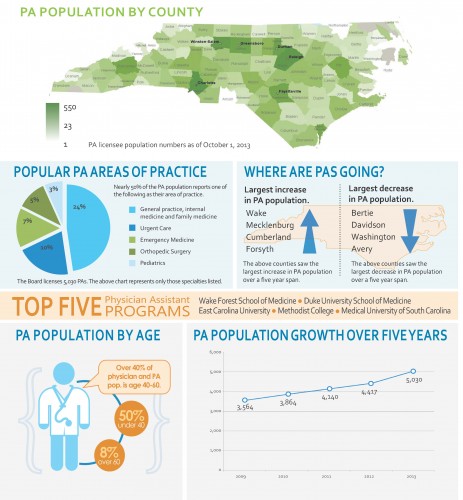